The political leaders most able to do something continue to ignore the issue of climate change. While the cataclysmic effects of global warming become ever clearer, scientists and significant swathes of the public are trying to make a difference. That’s the focus of the eye-opening documentary Ice on Fire.”It focuses on many never-before-seen solutions designed to slow down our escalating environmental crisis. 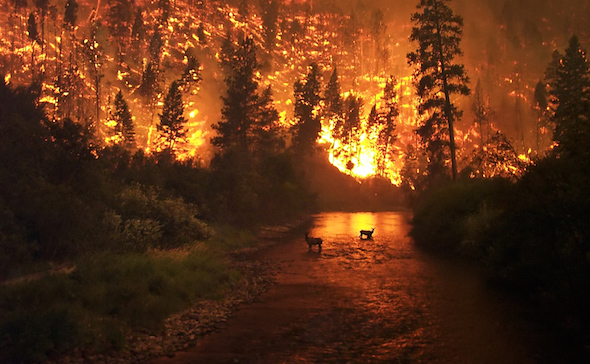 The film goes beyond the current climate change narrative and offers hope that we can actually stave off the worst effects of global warming. Ice on Fire focuses on the cutting-edge research behind today’s climate science – and innovations aimed at reducing carbon in the atmosphere, which could pave the way for a reduction in the global temperature rise and a benefit to the planet’s life systems.

With sweeping cinematography of a world worth saving, Ice on Fire was filmed across the globe, from Norway to Alaska, Iceland to Colorado, Switzerland to Costa Rica to Connecticut. The film highlights firsthand accounts of people at the forefront of the climate crisis, with insights from scientists, farmers, innovators and others. Ice on Fire is directed by Leila Conners and narrated by Leonardo DiCaprio.

Ice on Fire emphasizes the importance of an immediate, two-pronged approach to reversing the crisis: reducing carbon emissions through traditional renewable energy sources and new ones, like tidal energy, and implementing “drawdown” measures, focusing on methods for drawing down and sequestering carbon, including direct air capture, sea farms, urban farms, biochar, marine snow, bionic leaves and others.

While much of the political and economic focus has been on the energy sector, the film points out that drawdown (pulling CO2 out of the atmosphere and oceans and sequestering it underground or into new materials) is perhaps the best hope for mitigating climate change.

The film visits places such as: the Usal Redwood Forest Foundation in northern California, highlighting a carbon-storage project that focuses on reforestation and creates “biochar” to put CO2 back into the soil; Ron Finley’s urban farm in Los Angeles, where members of the community grow food that takes carbon out of the air and is nutritious; Climeworks’ nimble direct air capture machine in Zurich; and Thimble Island Ocean Farm off the coast of Connecticut, where owner Bren Smith grows shellfish and seaweed that soak up more carbon than land-based plants and can be used for food, animal feed and fertilizer.

Ice on Fire finds that while the risks and urgency may be higher than ever today, there are also greater opportunities for innovative solutions, offering a realistic but hopeful perspective on a key global issue that demands our attention. However, with the Troglodytes mainly in the Republican party, but also some in the leadership of the Democratic National Committee - the question remains: “Is it game over or game on?”

Jun 14, 2022
Tour
Visit Cuba with the Center for Global Justice Enjoy two stimulating weeks in a country committed to building Socialism. Learn about Cuba’s public goods such as free health care and education provided by the state, how Cuba dealt with the pandemic, its collective production and services in agricultural and urban cooperatives, its form of...

One day in April, a Central American family seeking asylum prepared to cross the border from Mexico to the US. Learn about their arduous journey and how dozens of dedicated advocates and humanitarians played vital roles in getting them to safety. Immigration attorneys, Rebecca Eichler and Careen Shannon are joined by award-winning documentary... Read more

Possibly the most cataclysmic and tragic event of the post WWII period was the illegitimate and manipulated demise of the Soviet Union in 1991.  As then President Gorbachev was inching toward democratic reform and opening Soviet society to the west, his Western “partners” – Ronald Reagan, George H.W. Bush, James Baker and others were... Read more

Most peoples live by myths that define their identity. Texans are no exception. But their myths are especially powerful in shaping their character. “Remember the Alamo” is a slogan that keeps alive the mythic memory of the founding of that nation.

That myth is debunked in the new book Forget the Alamo: The True Story of the Myth That... Read more